Ahead of the annual LME conference on Monday 19th October, The London Metal Exchange (LME) has stated that “metals [are] the cornerstone of sustainability” in future economic activity.

Shipfix decided to undertake a review of Steel Products; a particular focus on Steel Hot Rolled Coils (HRC), Steel Rebar, and Steel Scraps that are vital to many economic sectors and traded/quoted publicly on the LME.

In 2004, the world's top 10 steel producers counted 1 Chinese company. By 2019 that number had increased to six, excluding Chinese JVs globally. Today, China is the number 1 producer of steel accounting for over 50% of global production volume.

The country’s steel export prices weakened from the beginning of September 2020; the first decline since mid-March.

There is a clear correlation between Shipfix HRC volumes ordered from China and Steel HRC price FOB China up until May 2020. However, prices taken off from May to September. Part of the answer could lie in the fast appreciation of the Yuan against the US dollar which has seen Chinese exporters raise their USD-denominated export prices to protect their Yuan profit (see graph below);

Chinese export prices since seen a correction, with rival producers also increasing prices in the context of recovering demand.

The price gap between Chinese steel products and those of makers in other countries has narrowed, with Chinese prices sometimes punching above those of foreign competitors. As we can see on the graph below, for a short period of time Steel HRC FOB China prices were higher than prices for Steel HRC N. America (Platts).

More recently, the European Commission decided to impose import duties on hot-rolled stainless steel coils and sheets from China (tariffs up to 19%), Indonesia (up to 17.3%) and Taiwan (up to 7.5%), the tariffs kicked in October 8th.

Whilst Chinese prices were driven by many factors among them: rising iron ore prices and CNY appreciation; North American prices were supported by robust domestic demand, and increased steel HRC order volumes destined for seaborne shipping, illustrated by Shipfix US HRC Index.

Last week, The American Iron and Steel Institute (AISI) reported that for the month of August 2020 US steel HRC shipments showed up 6% to the previous month of July, which was reflected in Shipfix US HRC Index. Shipfix can read steel market sentiment up to 45 days ahead of the official market settlement (see graph below);

COVID-19 has had a profound effect on the construction and demolition sectors. As a consequence the scrap metal market had to grapple with abrupt supply chain interruptions. Despite the fact that steel mills scaled back their output dramatically, steel scrap prices rose by $40 (+17%) per ton from April in 2 months in large part due to a reduced scrap collection capacity.

Governments recognising the value and current scarcity of scrap began to limit scrap metal exports: the UAE (mid-May) and South Africa (mid-July) placed such an outright ban; China made an effort to welcome more imported ferrous scrap shipments by trying to have scrap reclassified from “waste” to a “resource”. The rise in scrap prices was followed by the resumption of demolition and construction activity which lead to a rise in scrap yard traffic and shipment volumes.

For steel mill melt shops their strong reliance on a steady stream of scrap means that as the economy (and steel output) ramps up, scrap supply will lag initially, prompting a rise in prices.

This is shown on the graph below with Shipfix Scrap Metals Index tracking order sentiment for scrap metals, which is strongly correlated to LME steel scrap price. Scrap metals shipments have always been an important signal of global economical activity, and it remains a crucial insights for understanding economic trends. 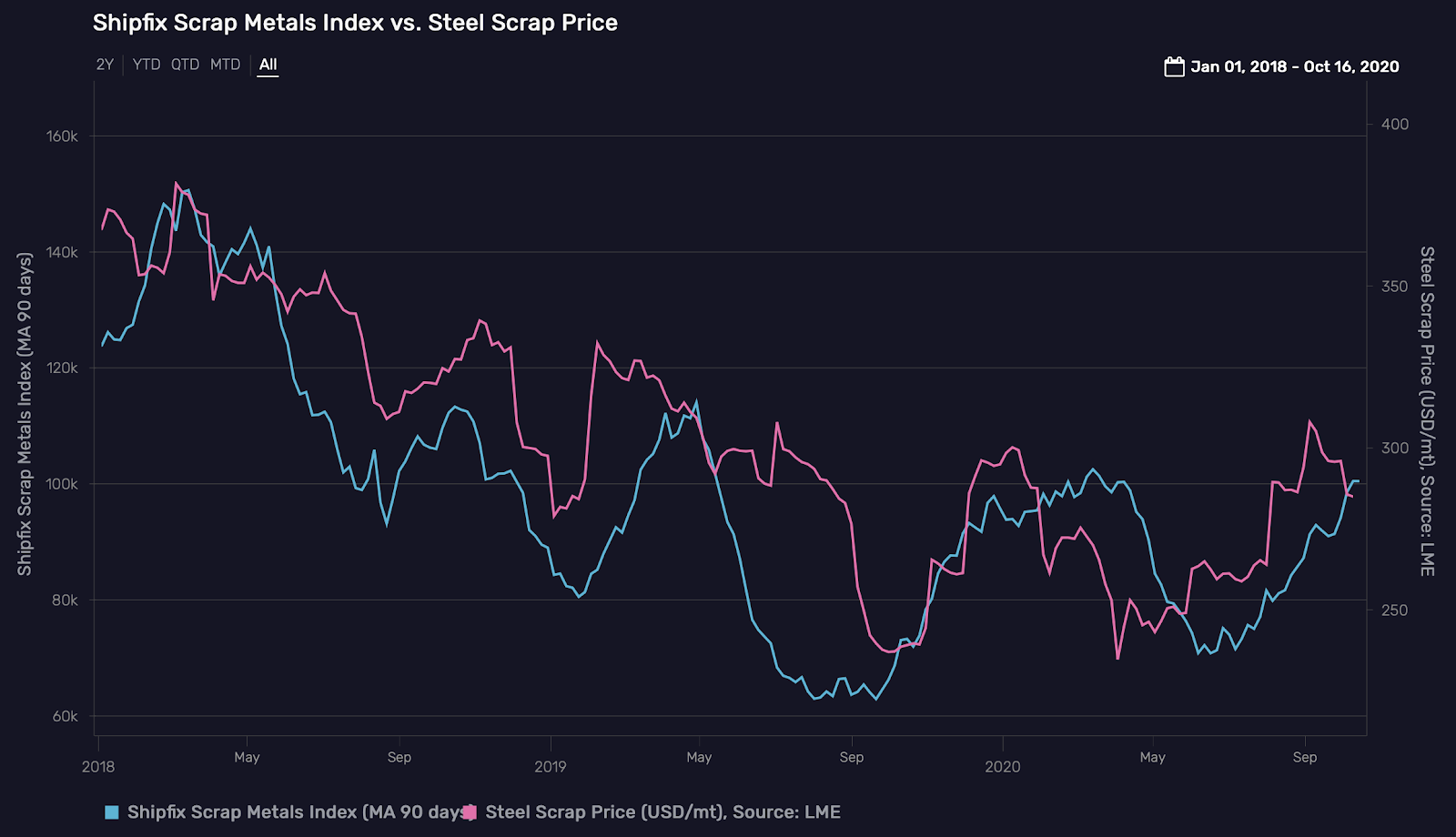 Steel rebar is used as a tensioning device in the construction industry generally for concrete reinforcement.

Tracking of steel rebar order sentiment can be a good hint into construction and infrastructure sectors and post-pandemic economic recoveries in general. Indeed, steel rebar has often been referred to as “rebar gold”; Chinese investors saw it as a refuge from the chaos engulfing financial markets during the global crisis.

“Rebar’s unexpected ascent as a financial sanctuary comes as Chinese investors bet that Beijing is going to embark on a massive bout of stimulus to help prop up the country’s economy in the aftermath of the coronavirus, boosting demand for raw materials used in construction” (Bloomberg, September 2020)

Some analysts believe that the Chinese government will bolster infrastructure spending as they did post-SARS to boost domestic consumption.

The global importance of the steel rebar market underlines the value of the Shipfix Steel Rebar Index which tracks order sentiment for the volume of steel rebars/bars/debars shipped since 2015, especially given its strong correlation with LME steel rebar prices (see graph below); 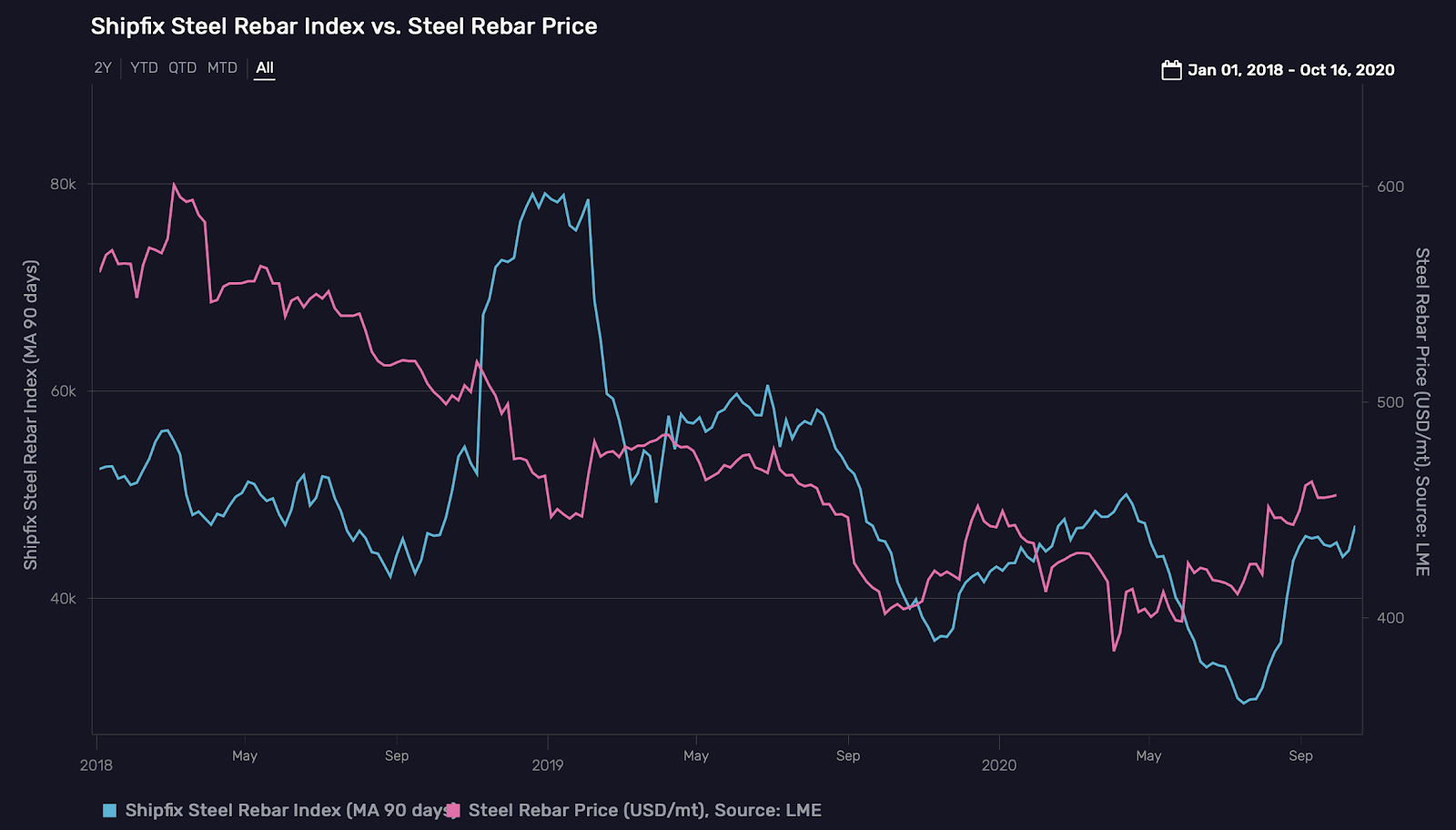