In this post, we look into the corn trade and compare it with soybean based on an analysis of historical Shipfix export indicators as well as our Shipfix Forward Order curve which is filterable by over 460 commodities as well as their country of loading and discharge.

Corn is the third largest crop produced by volume in the world after wheat and rice. The crop is traded for animal feed, the food and beverage industries, and biofuel. Only 16% of world maize production is exported overall but global trade has increased by 30% since 2016/2017 to an estimated 183 million tons for 2020/2021, according to the recent publication “Grain: World Markets and Trends” by United States Department of Agriculture / Foreign Agricultural Service.

The global trade of corn is supplied by a few large exporters whilst demand is driven by many importing countries globally. The US is historically the world’s largest exporter of the crop with about 30% of global volumes, down by 10% over the last 4 years.

US Soybean exports to China are already causing elevation costs to rise significantly at key export hubs such as the Pacific Northwest and the US Gulf. Agricensus quoted trade sources as follows:

“Despite expectations that the US will land one of the largest corn crops in history - and is likely to leave US corn less competitive. Line-ups for the 2020/21 marketing year are stuffed with bean loadings, leaving less space for other commodities to load at key export hubs”.

Shipfix market insights provide you with global market order data on over 460 commodities. We have proven to be a reliable indicator of market sentiment and an early predictor of directional trends in physical imports and exports for those products.

The graph below compares the seaborne orders of corn and soybean out of the US Gulf and US North Pacific Coast (rebased at 100 in 2015 as a reference year). Starting July 2020 onwards we observe a sharp rise soybean and a drop in corn. This seems to validate the competitive pressures discussed above between the two products at major export hubs. 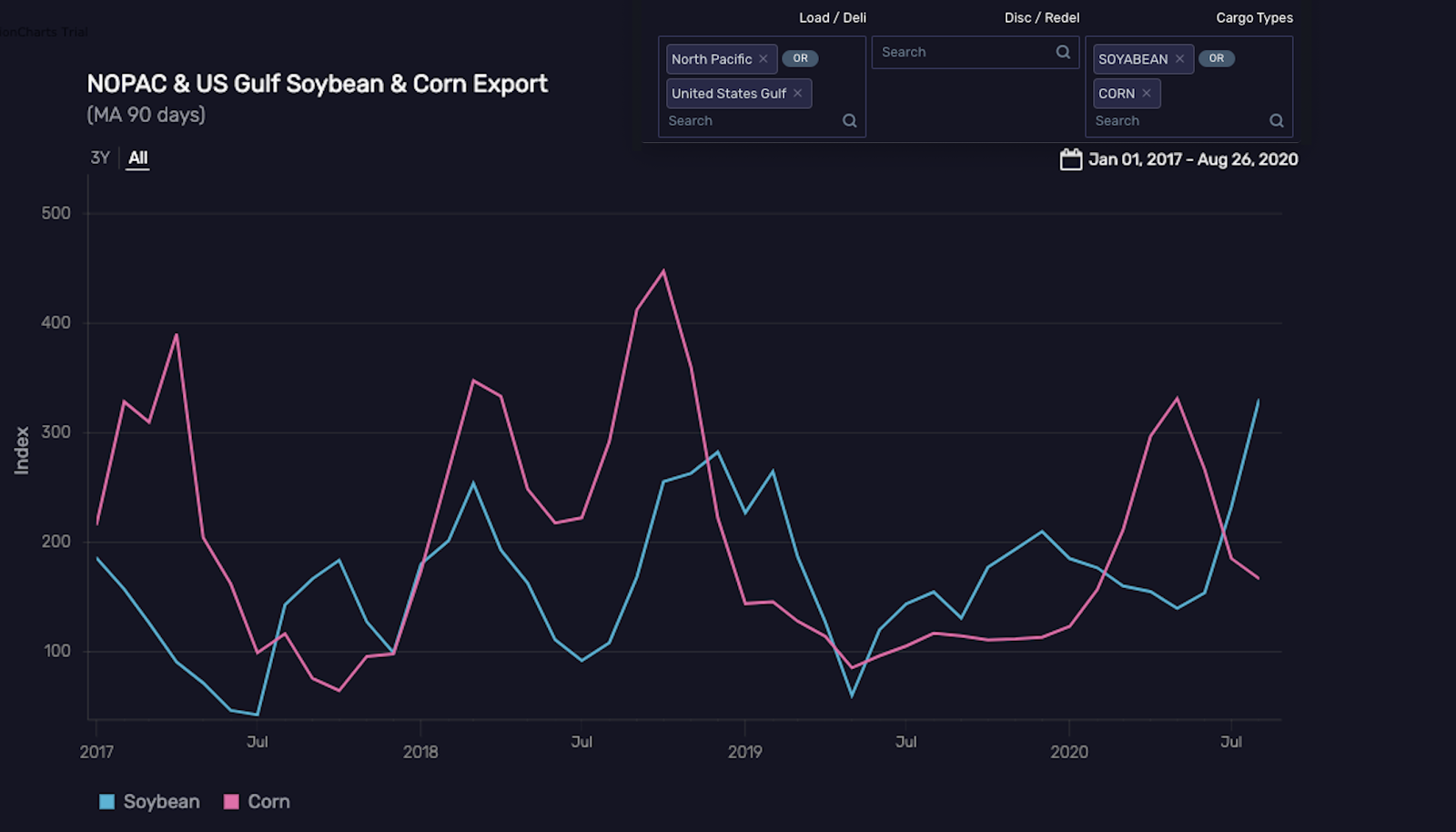 Visualisation of early start of harvest season in Brazil and Argentina

Brazil and Argentina are the second and third largest exporters of corn respectively, behind the US, representing in total 40% of global seaborne corn trade last year.

Shipfix Markets Insights feature a forward curve (shown below) which is based on anonymised market orders globally and shows a clear predominance of spot orders for Brazilian and Argentinian corn driven by the harvest season which starts earlier in South American countries.

Other potential drivers of US corn volume fluctuations